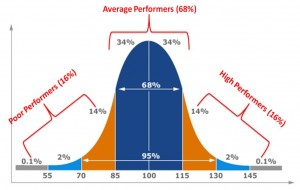 Bell curve is well known, rather infamous. Now junked by many companies, it seemed very good way to improve organization performance management. It helped to ensure that performance ratings are well differentiated. It helped to reward the high performers and weed out the non-performers.

If performance is measured objectively and in uniform way, this number will emerge naturally.

Big question is – if this worked two decades back, why doesn’t it work now? Is it not true anymore?

May be it still is true. But consider the following:

1000 people are not objectively goaled and evaluated by same manager. With the concept of span of control, you will have 10-15 people working with each manager. Then you have manager of managers. Still there would be many such senior managers. Thus build up the organization hierarchies.

Now, how to find these bottom or top 10 percent? One one extreme, there could be bad (worst) performers in one single team itself. On the other, the bad performers may be equally distributed across all teams. Further bad news – On very small sample size of 10 people team, the phenomenon of bell curve may not work. Quite tricky.

How to practically use Bell curve then?

Many times, official or unofficial quotas emerge. Organizations may deny it. But it exists. Each smaller unit like a group or department would be asked to force-fit their people. Each team would rate with maximum differentiation in performance ratings. Then these ratings are to be discussed in next level of organization unit.

The ratings are ‘normalized’ by all peer managers and senior manager to remove ‘subjectivity of managers’.  To settle the issue of normalize across teams, managers might have to rank their people. This helps to compare only the bottom guys across all teams. Only for those, all peer managers could get into details and decide the worst performer.

However subjectivity will always remain.

The problem is not in the rating coming out of such system.

The real issue is in taking such ratings too seriously.  The issue is in using it for everything – from salary, firing decisions and promotions. As an employee if you judge yourself by rating – you are a fool.

Then how to use the Bell curve? Still, how to make a rating useful?

It probably is a good tool to cross check performance across teams. If the performance rating across organizations did not fit the model at org-level, this bell curve could have indicated it.

Then HR should have found ways to improve effectiveness. Just think about the possibilities:

If HR team could get into these analysis, it may bring out something interesting and useful.

Lesson should be obvious.

Do not “implement” Bell curve. Use it to “observe” performance. If it is not a curve, something may be wrong. Find ways to address them. Bell curve is a ‘feedback loop’. Do not use it to ‘send commands’.

Going beyond bell curve, there are many good concepts and models in management and psychology. Unfortunately, many tools are used in terrible ways.

Biggest shield for you should be “common sense”. If  your organization teaches you something against common sense, watch out. You are in an organization which could be already a ‘toxic workplace’ or the one in the making.